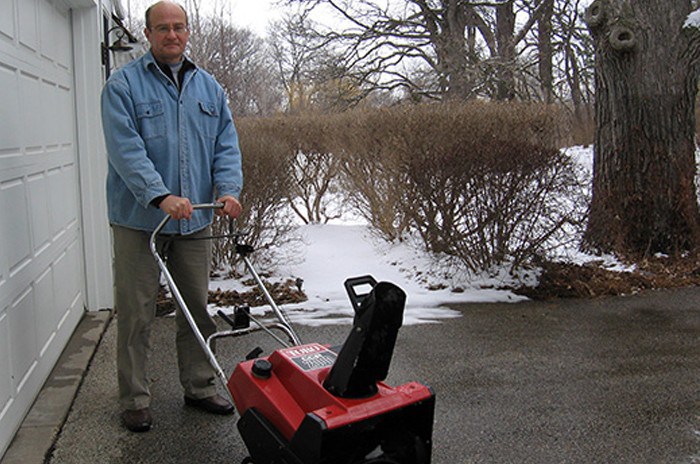 I wanted to take this occasion to thank you for making an excellent snowthrower that has gotten me through nearly 25 Chicagoland winters and that is still going strong. The only thing that has lasted longer is my wife (thank God), but she isn’t as good in the snow. I’m sure she would want to add her appreciation.

I have had to replace a few nuts, bolts and parts over the years, but nothing a weekend warrior couldn’t manage. It’s been reasonably carefree given the tons of snow it’s moved under extreme conditions and abuse.

It started every winter (except one) on the first pull, including this 25th season, which was a major relief.

Early this month, my neighbor’s snowthrower broke down following Chicagoland’s third-biggest snowfall in recorded history. While he chased around for a solution, I finished his driveway. This got me asking, how old is my Toro that was still moving snow? I really needed to replace the (original) rubber paddles and scraper bar. All were worn to the metal [my bad] from years of use and abuse. I grabbed the serial and model number and went to the Internet for more information.

To my surprise, the serial number told me the unit was a 1986 model, and in fact, from Toro’s first production year for the 2-cycle CCR 2000. The machine was purchased in Norridge, IL from Universal Lawn and Garden. Our Swedish-built automobile purchased the same year is long gone from our home, but not our Toro. As for our CCR 2000, that’s gone through nearly 25 Midwest winters now, it looks ready for another season.

Over the years, it has been my most reliable machine. It not only went through the recent 20-inch February, 2011 storm, but also a 22-incher (Chicago’s second biggest) in 1999. And, February 2011 will be Chicago’s snowiest February ever. As for repairs, I had to replace the drive belt a couple of times and the spark plug. Also, over the years, the bolts holding the engine came loose or fell out, without stopping it. I have since replaced most of them and some others. The first year I stored it in the basement [again, my bad]. Varnish build-up required a carburetor cleaning. Last year the spark plug wire came loose making the engine run intermittently, but this was a quick fix. Other than that, it started on the first pull (to my great relief) every season.

I just finished replacing the paddles, scrapper and lower metal housing myself, which took about an hour or two (lots of screws holding them). That is all there’s been in 25 years. All maintenance (or lack thereof) has been done by me and I’ve been the sole operator.

Our Long Grove, IL driveway is about 1,200 square feet. We now have about 125 feet of walkway from the driveway to the front door and also a backyard deck to keep clean. Our Toro is also used from time to time to clear an ice skating pond. It does a great job of throwing snow out of the way. For the first ten years, the CCR 2000 did our Northwest Chicago sidewalks and 50 feet of alleyway from our garage to the main thoroughfare. The Toro has paid for itself almost every year.

In our area, a commercial snow removal service over the years has charged between $25 and $50 per plowing. Personally, I do it myself for the exercise and to be outdoors. I do it on my own schedule so we don’t have to wait for the plow to dig us out. The snow goes where I want it and not where the plow can push it. With the recent 20-inch storm, this is not a trivial matter. Even with worn parts, my 25-year-old Toro performed well, and even better now with new ones. Until “global warming” arrives or we move to Arizona, I’ll depend on my Toro.